We always hear that age slows us down, but our next guest on Running Around Charlotte defies that idea. Donny Forsyth is one of the top Masters triathletes in the country, winning his age group at races all over the U.S. with his team, Triple Threat Racing. In December, he competed in the XTerra World Championships, and hasn’t stopped there.

It’s a good thing he owns a shoe store, with all of the rubber he wears out! Yes, Donny is one of the owners of Charlotte Running Company, which has 5 locations around the Charlotte area and -STOP THE PRESSES- was just named 2021 Best Running Store in America at The Running Event in Austin, Texas. He’s joining us now to tell us how a guy with a Masters Degree in Park & Recreation Management landed his first job in pharmaceuticals, only to transition to owning the best running store in America a few years later. 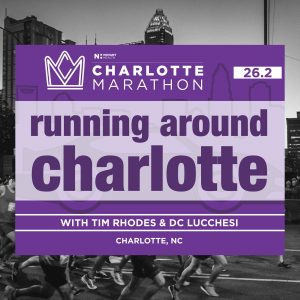